How Does Laser Treatment for Acne Scars Work? 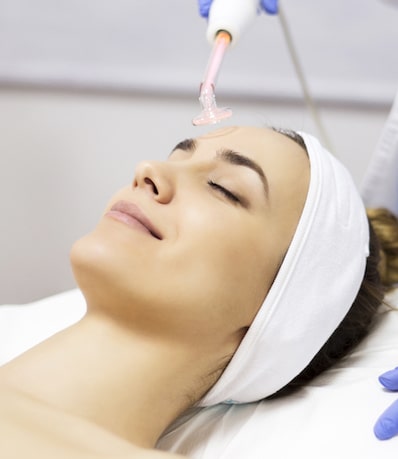 The first thing to remember is that lasers are not able to completely remove scars, but they are able to make them less noticeable to others. Lasers use a combination of heat and light to reduce the appearance of scarring on the body. The heat works to remove the top layer of the skin which is where the scar has formed. As the top layer of the scar begins to peel off, the skin will start to gain a smoother look which makes the scar less noticeable to others.

As the scar tissue continues to break apart, the laser light and heat encourage the growth of new skin cells and collagen. There is also an increase in the blood flow in the targeted area (thanks to the laser heat) which reduces any inflammation in the area.

All of these elements combine to give the scar a look that is less red and raised while also encouraging the healing of the skin.

In addition, there are some lasers that are able to penetrate the skin at a deeper level without destroying the superficial layers of the skin. Collagen production is also promoted as the laser penetrates to the deeper levels of the skin.

In general, laser treatment is a safe choice for most people who are experiencing scarring from acne. There are some patients who are not good candidates for this treatment option, and they include someone still suffering from acne breakouts, a person with deep wrinkles and a patient who is an active smoker (as smoking can negatively impact the healing process).

Laser Treatments for Acne Scars – Do They Hurt?

In general, laser treatments for acne scars are not painful. It has been compared to the sensation of having a rubber band snapped against the skin. Ablative lasers might cause some discomfort due to the destruction of skin layers so you might need some mild sedation before the procedure. If there is any discomfort with a non-ablative laser treatment, a topical cream can be used to numb the area being treated.

Since the upper layers of the skin are destroyed during an ablative laser treatment, the recovery process will involve skin that looks like it has suffered a sunburn. In addition, the skin might blister and even ooze a yellowish fluid. Your doctor will give you instructions on how to keep the treated skin protected and clean during the healing process. It will take five to seven days for the damaged skin to start to peel. The new skin will be pink in appearance but will gain its natural tone as time passes.

The recovery time from non-ablative and fractional lasers is much simpler. The treated area will have a pink and swollen look for a day or two before it returns to normal.

Side Effects of Laser Treatments for Acne Scars

You should be aware of potential side effects before undergoing a laser treatment for acne scars. Some of the possible side effects include:

If you have any questions or concerns about laser treatment for acne scars, consult with a doctor experienced in performing the treatment before undergoing the actual procedure.

Fillers and the Coronavirus Vaccine – Can You Have Them at the Same Time?